June 10, 2020 – Friday, June 12, marks the 40th anniversary of the Arizona Groundwater Management Act of 1980, the law that changed the trajectory of water use in Arizona.

The 1980 Act was – and remains — the most sweeping state law in the Nation governing groundwater use. In addition to creating a coherent, manageable system for helping wean Arizona’s most populous regions from groundwater use, it enacted the framework for long-term groundwater-use reduction that continues to the present.

“In Arizona, we stand on the shoulders of giants — pragmatic, visionary leaders whose achievements have shown us the way and enabled our high quality of life,” said Governor Doug Ducey.

“Last year, we followed their example by coming together—Republicans and Democrats—to pass Arizona’s Drought Contingency Plan. We will continue to be guided by a spirit of collaboration and cooperation as we build on the work of those who came before us and secure Arizona’s water future for generations to come.”

As part of the 1980 Act, the Arizona Department of Water Resources was created to enforce the Act in the regions of the State that would become known as “Active Management Areas.” The Department also was charged with taking responsibility for managing Arizona’s allocation of Colorado River water.

In 1980, Arizona water use was on a path to exceed 10 million acre-feet per year statewide, the majority of it pumped from the ground. Water users and political leaders recognized then that continuing to pump groundwater at such levels in a fast-growing Sun Belt state like Arizona was not sustainable.

The Act addressed this problem in central Arizona by prohibiting the expansion of farmland, requiring an assured 100-year water supply for new residential development, limiting the drilling of new wells, and imposing mandatory conservation requirements. With these measures in place, groundwater depletion in central Arizona slowed dramatically.

“In passing the Groundwater Management Act, the State recognized that overuse of groundwater—a finite supply—threatened the economy and welfare of Arizona and its citizens,” observes former ADWR Director Kathleen Ferris, who served as director of legislative staff working on the project in 1979-1980.

“While more must be done to protect the state’s groundwater, I hate to think of where we’d be now without the Act.”

Ferris and her husband, filmmaker Michael Schiffer, produced a documentary on the creation of the Act – “Groundwater: To enact a law for the common good.”

A central goal of the Act is to conserve the State’s most vital resource, water. It has succeeded at the goal remarkably well.

Since 1957, Arizona’s population has grown nearly 500 percent, to 6.7 million residents as of 2018. Its economy has exploded from a gross domestic income of $13.4 billion in 1957 to about $270 billion in 2017. Yet, despite such dramatic growth, Arizona’s total water use actually declined to 1957 levels following the passage of the Act. 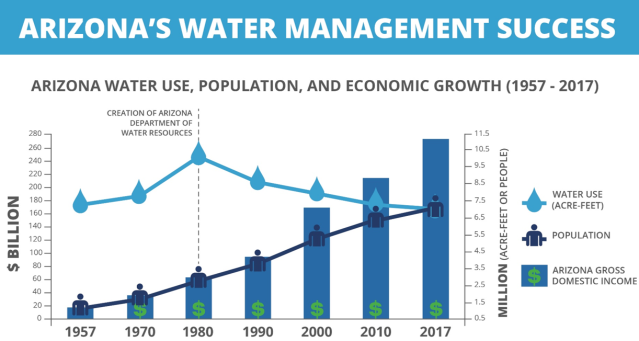 Highlights of the Act:

One thought on “Press Release: A Statement on the 40th Anniversary of Arizona Groundwater Management Act of 1980”