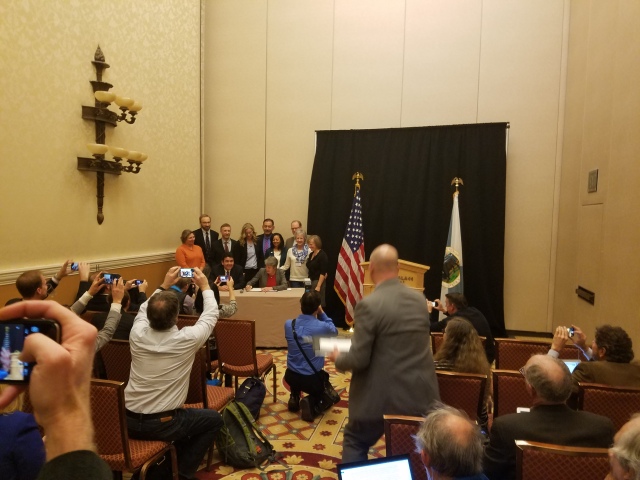 CRWUA meetings, Las Vegas — The members of the Colorado River Water Users Association may have parted ways last week disappointed that the Colorado River Basin states and the federal government were unable to finalize negotiations to protect the river system from drought.

But they still managed to finish their meetings on a high note, including encouragement from Secretary of Interior Sally Jewell to continue negotiating.

“We want to get as far as we possibly can, and that’s what we’re going to be urging everybody to do,” Jewell said to reporters at the CRWUA meetings on Thursday.

Many of the negotiators themselves reaffirmed their commitment to getting a drought-contingency plan done soon, if not before the change of administration in Washington, D.C.

“It’s critical that we do this,” said Tom Buschatzke, director of the Arizona Department of Water Resources. “It benefits everyone, up and down the river.”

Also on Thursday afternoon, Secretary Jewell officially signed a decision for managing the Glen Canyon Dam over the next 20 years, a deal that significantly updates environmental considerations in the dam’s operation.

Known as the Long-term Experimental and Management Plan (or, LTEMP), the plan is consistent with the federal Grand Canyon Protection Act of 1992 and represents two decades of study of the dam and its impacts on downstream resources.

The Act required the Secretary of Interior to operate Glen Canyon Dam in such a manner as to protect and mitigate adverse effects and improve the values for which Grand Canyon and Glen Canyon were established, which provided the basis for the new management plan signed by Secretary Jewell.

The out-going Interior Secretary signed the Record of Decision approving the management plan shortly before the end of the annual CRWUA meetings in Las Vegas.

Secretary Jewell also expressed optimism that an agreement to protect Lake Mead and the rest of the Colorado River system, as well as a separately negotiated river-system agreement with the Republic of Mexico, should be forthcoming soon.

“We have an agreement that is pending with Mexico that we need to get across the finish line in order to address our water needs between the two countries…  and that has to take first priority,” she said to reporters.

In a letter to Jewell sent in November, representatives of Arizona and the other six Colorado River basin states voiced their qualified approval of the LTEMP.