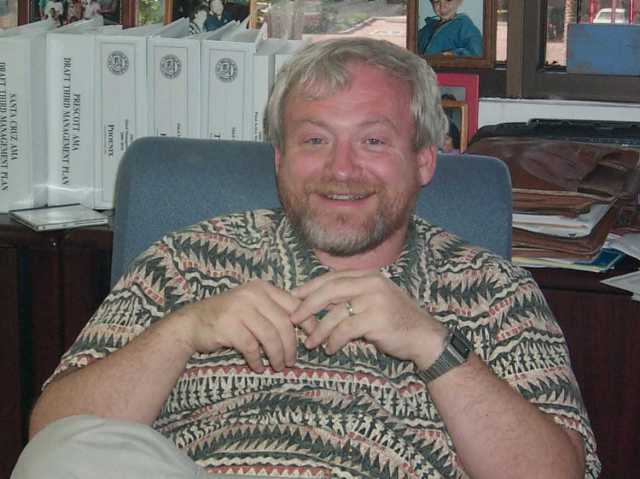 Steve Olson, who wore more hats as a defender of Arizona’s water supply than we can count, passed away on Christmas Eve following a lengthy battle with cancer.

As Steve’s son, Nicholas, reported on Facebook, his Dad was surrounded at the end by family, and had taken visits from numerous friends through the day. He even enjoyed a bottle of fine red wine opened by his brother, Jeff Olson.

Steve is the second member of Arizona’s water community to pass away in less than a month. Rick Lavis, an important cotton-industry representative and a member of Governor Ducey’s Water Augmentation Council, died in late November following his own struggle with cancer.

In recent years, Steve had been the principal consultant for his own lobbying group, Olson Policy Services.

Prior to that he had been a senior policy adviser to the Nature Conservancy, executive director of the Arizona Municipal Water Users Association and government relations director for the city of Scottsdale.

He worked with a large group of state-agency volunteers setting up the Water Quality Assurance Revolving Fund, as well as the rules for using it. The WQARF, as the fund was known, constituted the state form of the federal Environmental Protection Agency’s Superfund.

Many of us here at the Arizona Department of Water Resources remember him as legislative liaison for ADWR.

Working under Director Rita Maguire at ADWR, Steve also oversaw the third management plan for the “active management areas” created by the Groundwater Management Act of 1980. He also served as the deputy area director for the Tucson Active Management Area and was a member of the Arizona Water Protection Fund Commission.

“In a few years, Steve left for a new job – I can’t remember where – and I claimed his larger office,” remembers Lavelle.

“While I pondered this out-of-date mound of paper, the forces of nature settled the issue. I was across the room working at the computer when shelving collapsed as books, binders and thousands of pages crashed to the floor, panicking the entire 5th and most of the lower floors!

“I still recall the noise. I also remember Steve’s hearty laugh when I told him about it. That’s how Steve was. Life was an amusement to Steve, one he shared with those fortunates in his company.”

More than anything else, Steve will be remembered as the kindest of souls. As his friend and former colleague (all Steve’s colleagues remained his fast friends) Karen Peters of the city of Phoenix also observed on Facebook, Steve was “deeply devoted to making things right in this world.”

Our hearts go out to Steve’s family. He spent many years among us at Water Resources doing all he could to make things right in this world. And he did his job well.