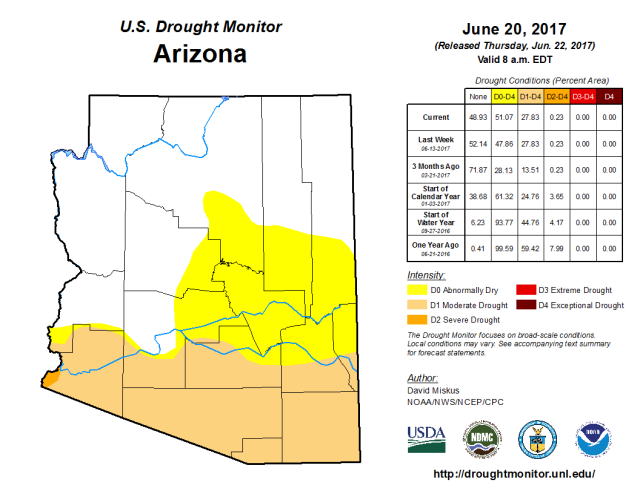 Short-term Drought Status Summary for May 2017

While several storm systems passed through the state in May, the precipitation fell primarily across central and northern Arizona, leaving southern Arizona relatively dry.

The dry spring that followed the dry winter in southeastern Arizona led to deterioration in drought conditions in this area. Pima, Cochise, Santa Cruz, southern Maricopa, Pinal, Graham and Greenlee counties are now all in moderate drought (D1).

Until the monsoon activity begins, conditions are not likely to improve, and fire danger continues to be high in central and southern Arizona.

The winter storms in January and February combined with the earlier storms in November and December brought significant rain and snow to northern and central Arizona.

The relatively heavy winter precipitation has finally improved many watersheds that were bordering an improvement over the past six months or longer.

Long-term drought and water supply conditions in northern Arizona and the Salt River watersheds are much better than they were over the past six to ten years. However, this winter was still not as wet as in late 1980s and early 1990s, before this drought began, and abnormally dry conditions still persist in many parts of the state.