The imposing “Water – Use It Wisely” tower – a 16-foot tall pyramid of one-gallon water jugs – is now on display in the Executive Tower lobby.

The display reflects Governor Ducey’s expressed commitment to water issues during the current legislative session. Those include protecting the Colorado River system, as well as emphasizing the theme of the long-running Water – Use It Wisely campaign, which is to bolster water conservation efforts in Arizona communities.

Constructed from 120 water jugs, the tower represents a physical depiction of the amount of water – 120 gallons – that the average person in Arizona consumes daily. 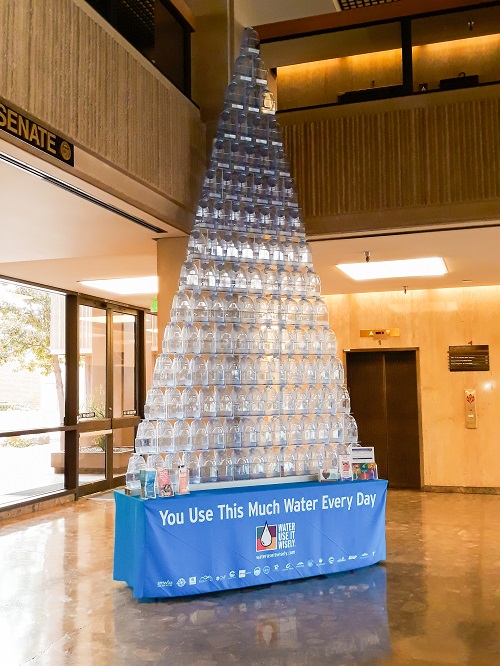 Typically, that use includes seven gallons consumed either by drinking or cooking, 14 gallons used by shower or bath, 15 gallons by toilets, 18 gallons used up daily by household cleaning such as washing machines or dishwashers, and 66 gallons used daily for outdoor uses such as watering lawns and plants.

The tower will be on display at the Executive Tower at 1700 W. Washington St. through the month of January.

The Water – Use It Wisely campaign is a two-decade partnership among Arizona communities and organizations dedicated to providing Arizonans with meaningful tools for efficiently limiting water waste.

The Arizona Department of Water Resources is a Regional Campaign Steering Committee partner of the campaign.

For further information about the Tower, see: