Is it so wrong to want to revel in good water news a bit?

After enduring more than 19 years of lingering drought in the Southwest and its implications for the Colorado River system, we think not.

This month, Congress has passed, and the President has signed into law, the Colorado River Drought Contingency Plan Authorization Act, which permits the Secretary of the Interior to sign a DCP agreement with the Seven Basin States.

Considering the very serious potential consequences of Lake Mead water levels falling to critically low levels, that is truly something worthy of celebration. So, too, was the remarkable bipartisanship and leadership on display among the Arizona congressional delegation, which led the DCP effort in in both the House and Senate. 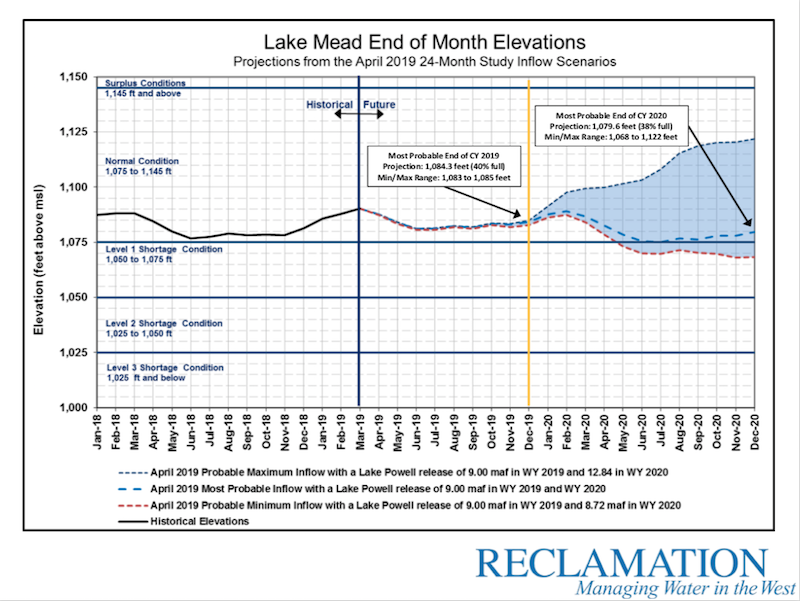 On top of that, hydrology reports both in-state and in the Colorado River system indicate a 2019 winter snowpack that in many cases is well above average.

The implications of the Bureau of Reclamation’s recent April 2019 24-Month Study of projections for the 2020 water year (and, as the name implies, the next 24 months) are especially significant.

The Bureau updates its projections each month, but the April report and the August report are critical in determining how much water will be released from Lake Powell into Lake Mead in the coming year. The elevation levels forecasted to be in each of those reservoirs at the end of each year trigger those releases.

Up until the 2019 snowpack in the Rocky Mountains began seriously building in February, the odds of a first-ever shortage declaration in water deliveries in 2020 were better than even. With every 24-Month Study report from February onward, however, those odds decreased. By the recent April report, the Bureau’s analysts expressed confidence that Lake Mead would likely start 2020 “almost 10 feet above the shortage determination trigger of 1,075 feet.”

As reported by the Bureau, the improved hydrology allows Lake Powell’s operation this year to shift to a “balancing” release of up to 9.0 million acre-feet into Lake Mead.