It is, indisputably, the best weather show in Arizona all year.

Nothing against the fine work of Arizona’s TV weather forecasters and meteorologists, but the best two hours of weather analysis, climate analysis, near-term predictions, long-term predictions, precipitation, Colorado River flows and the various impacts of all of it is the report of the Governor’s Drought Interagency Coordinating Group. 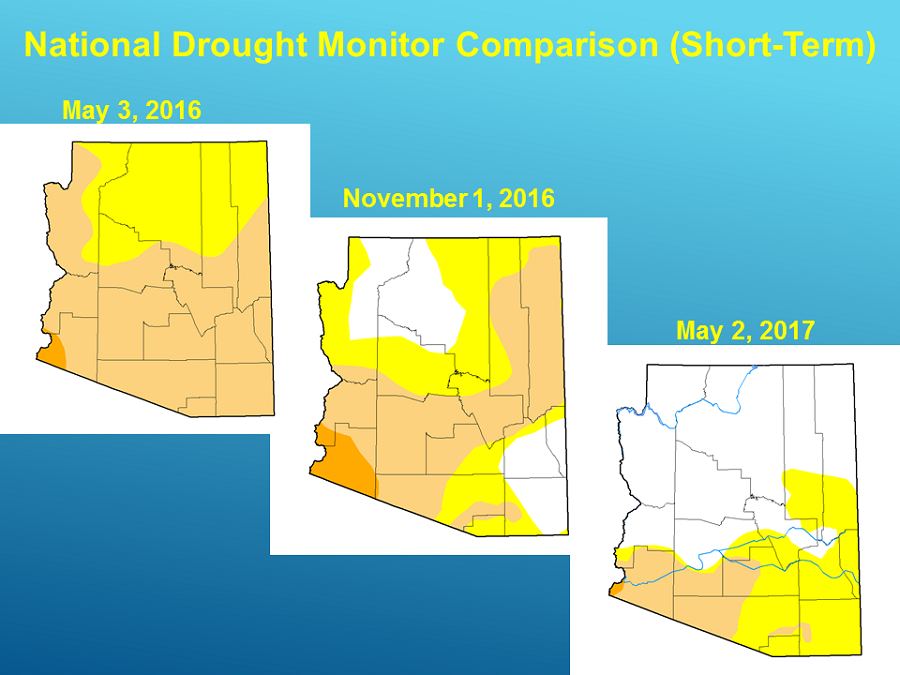 On Tuesday, the panel of water-weather-climate-watershed experts concluded Arizona remains in a state of drought.

As they have consistently since 1999, the coordinating group’s members voted to make an official recommendation that a letter be sent to the Arizona Governor alerting him to that fact. 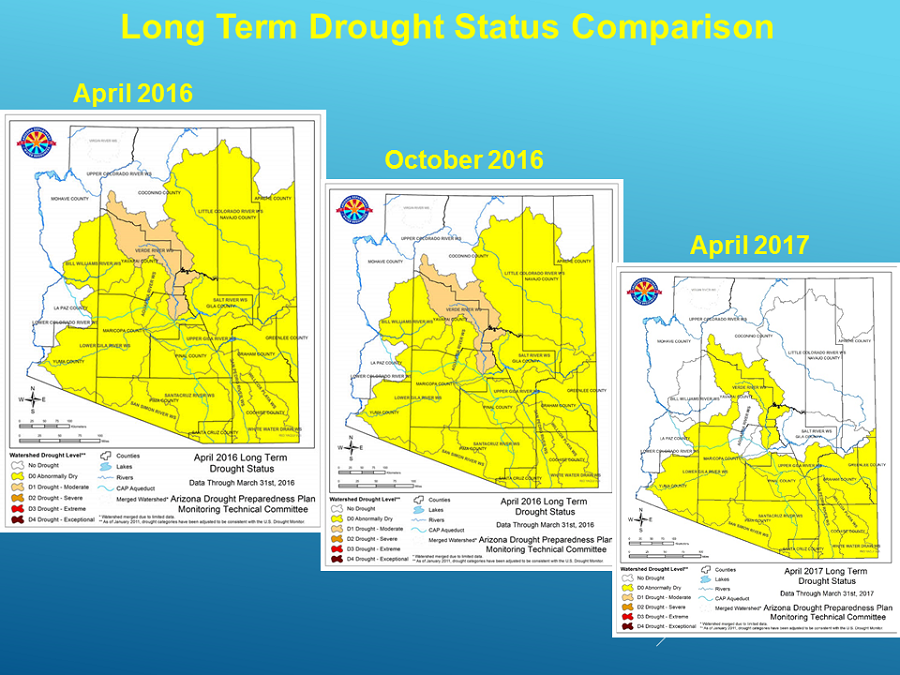 The recommendation will serve as the basis for an official drought declaration from Gov. Doug Ducey.

“Our outlook has improved and there have been a lot of proactive efforts to mitigate our (water) risks,” said Wendy Smith-Reeve of the Arizona Division of Emergency Management. Together with Arizona Department of Water Resources Director Tom Buschatzke, Smith-Reeve co-chairs the coordinating group.

“(But) while our short-term outlook is positive, long-term recommends we continue with a drought declaration,” she said. “This is not the time to stop pressing forward.”

Preceding that decision was some of the clearest and most precise weather-climate analysis provided anywhere in the state.

“Our monsoon picked up a lot of good activity, but for the short-term it still has been a little dry in the southern part of the state,” said Selover, analyzing the 2016 summer storm season.

Regarding the approaching summer monsoon season, O’Malley explained that the intensity of the rainy season will be determined by the “persistence” of a subtropical high-pressure system.

“If the high (pressure system) moves to the north (of Arizona), we get the moisture,” he said. 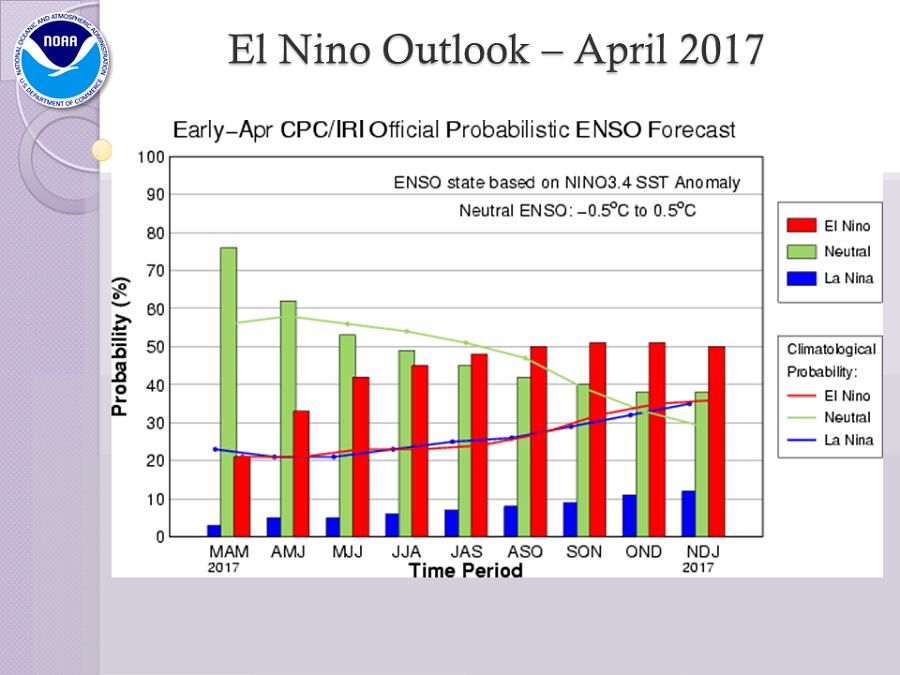 O’Malley said there is a “50-50” chance that conditions this summer will be ripe for the advent of a so-called “El Nino” weather pattern, which enhances the prospects of moisture in Arizona.

As for air temperatures this coming summer, stow the sweaters: “It’s very favorable that we’ll be warmer than average,” he said.

Conditions at Lake Mead and on the Colorado River, meanwhile, are moderately improved from last year, continuing the trend of positive effects arising from the strong, early-winter snowstorms in the western Rocky Mountains, said Jeff Inwood of the Department of Water Resources.

A warmer, “less wet” spring, however, kept the snowpack from fueling a banner-year runoff into the Colorado River system, said Inwood. Nevertheless, the good (if not quite ‘great’) news is that Lake Mead water levels stand now at about ten feet higher than at this time last year.

Inwood’s report, of course, directly impacts the on-going drama surrounding the chances that Lake Mead may descend to a depth that would trigger a water-delivery shortage declaration for Colorado River water users.

“As a result of the improved hydrologies, we are seeing decreased probabilities of a shortage,” said Inwood.

The report on Colorado River conditions dovetailed with the next presentation, a report on progress toward a drought contingency plan – including both inter- and intra-state agreements – by Water Resources Director Buschatzke.

Buschatzke, too, observed that “we’re in good shape going forward,” but reminded the audience that the chronic structural imbalance in Lake Mead remains. About 1.2 million acre-feet more water is extracted from the reservoir each year than on average flows into it.

Buschatzke updated the coordinating group on the progress of drought contingency planning negotiations.

The Water Resources director also reported that the Fiscal Year 2018 state budget recently passed by the Arizona Legislature included $2 million for each of the next three years for funding conservation efforts in Lake Mead.

Charlie Ester of Salt River Project reported that Arizona’s mountains enjoyed a wetter-than-average winter season, too. But not a record-breaker.

By mid-winter, SRP was crossing its fingers for a snowpack that might fill its premier reservoir, Roosevelt Lake. A dry April and snowfall that “didn’t slide” into the White Mountains — the main watershed for Roosevelt Lake – kept the big reservoir at just 76 percent of capacity, he said.

Still, inflow into Roosevelt wasn’t shabby: Prior to the winter snows, Roosevelt had dropped to just 44 percent of capacity.

In the forests, said Whitney, “we’re looking at a ‘normal’ year.”

“It’s not out of the realm of probability that we could have an upper-elevation fire,” he said. “But I see it being manageable.”

The real challenge, he said, would be in lower-elevation grasslands, which feasted on winter rains and now present a serious fire danger. Whitney noted the southern Arizona Sawmill Fire, which consumed 47,000 acres of mostly grasslands, as well as the smaller Mulberry Fire.

Thanks to the prospects of an earlier-than-average monsoon season, he said, “we are guardedly optimistic – with the caveat that we will have an elevated amount of lightning.”

At that, the co-chairs recommended – and the coordinating group unanimously supported – a recommendation of another drought declaration to be sent to the governor.